Again Roblox server is down for the past 12 hours. As per the Roblox official team, the reason for the server being down is due to a New update. As per the source they are about to roll a new update for the game. Roblox also made an announcement on Twitter that they are aware of the error and their team is fixing the error. This is not the first time the Roblox server is down. Earlier many times players face the same issue. The player spams the twitter with the memes on the server error. Few players are able to access the website but they are facing the website slower than usual. Moreover, the Player also reported the crash of the website eventually in the past 12 hours. 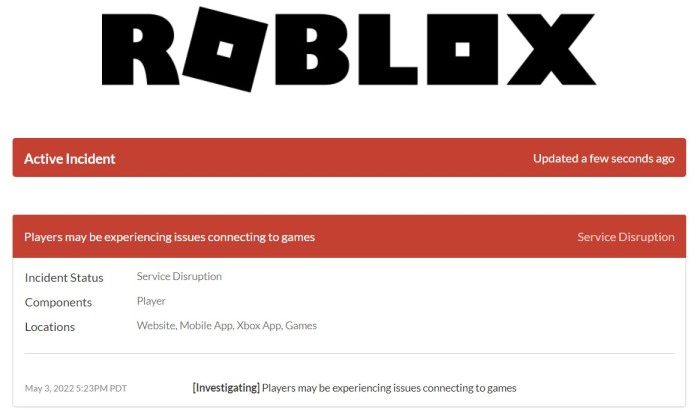 On Twitter, Roblox fans trend the #robloxdown #RobloxDownAgain hashtags on the server down. Fans are sharing the memes on different social media. As per the report player got the following error while visiting the official Roblox website.

Hi everyone, we are aware that some of you are having issues accessing Roblox. Our team is actively working on it. Thanks for your patience

You can comment below and tell us which error you are facing while launching Roblox Game. If any Roblox developer is reading the article might be helpful to fix the errors.

On 2nd February 2022, a Player experienced a similar issue. This is not the first-time player disappointed with the Roblox Corporation organization. You can refer to the following graph provided by Downdetector. As per the official report, the Service Disruption is experienced by the player on the Website, Mobile App, Xbox App, Games, Service, and Avatar Platform.

Me after only being on roblox for 6 months and this being the 100 time roblox been down😭: #RobloxDown pic.twitter.com/rNg8L6GpPy

Is Roblox remaking the great outage of 2021#robloxdown #RobloxDownAgain pic.twitter.com/i7nppbfllN

Is Roblox remaking the great outage of 2021#robloxdown #RobloxDownAgain pic.twitter.com/i7nppbfllN

If you have any thoughts on the server down you can write them down in the comment box. We will appreciate your thoughts.

18 thoughts on “Roblox Down Again, Check the Reason [Server Down Status]”